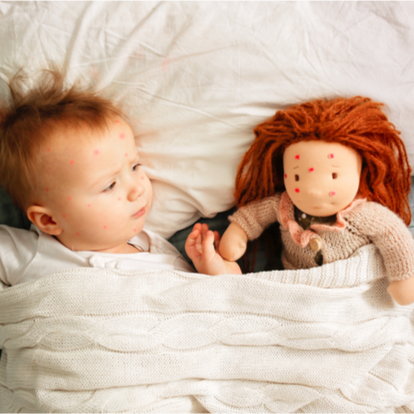 You might have heard or been told that one way to prevent certain diseases is to avoid contact with the sick person, items used by such a person, or disinfect surfaces you suspect the ill person might have touched.

At such times, you may wonder why such a precaution is taken. The answer is simple; some diseases are contagious. Meaning they can be spread through contact with saliva, mucus, or blood from an infected person. They can also be spread through contact with surfaces that have been touched by the organism causing the disease; Chickenpox is one such disease.

Chickenpox typically affects the skin and can cause rash, fever, and muscle aches. It can be serious if not treated properly, and sometimes, it can lead to pneumonia.

Chickenpox is caused by a virus known as Varicella zoster. This virus is also responsible for another disease called shingles and is transmitted from person to person by close contact with an infected person’s droplets. It is most contagious during the first 2 to 3 days of a person's illness.

Who is at Risk of Chickenpox?

Chickenpox is common among children but can also occur in teenagers. Other persons at risk of chickenpox include:

Symptoms: What are the Symptoms of Chickenpox

Symptoms of chickenpox usually develop one to three days after exposure. The most common symptom of chickenpox is a mild fever, usually accompanied by a sore throat, headache, runny nose, cough, and fatigue. Other symptoms include:

Treatment: How is Chickenpox Treated?

There are a few different antiviral medications that can treat chickenpox. They all work similarly by attacking the virus and stopping it from replicating. The most popular antiviral drugs for chickenpox are

Pain relief is one of the most common benefits associated with chickenpox treatment. Many people find that over-the-counter pain relievers (ibuprofen or acetaminophen) help relieve their symptoms.

Chickenpox fever is another common symptom of the disease, and it can be challenging to reduce. Drinking plenty of fluids, taking ibuprofen or acetaminophen as needed, and resting are effective ways to reduce fever.

There are a few things that you can do to keep yourself hydrated during chickenpox. Drink plenty of fluids, avoid caffeine and alcohol.

Skincare is an important part of chickenpox treatment.

Prevention: How can Chickenpox be Prevented?

The best way to prevent chickenpox is to get vaccinated. Children should receive their first dose of the vaccine between 12 and 15 months old and a second dose at 4 to 6 years old. Adults should get the vaccine if they haven't had it before.

Aside from vaccination, you can prevent chickenpox by taking certain precautions, including

Complications of chickenpox can vary widely, but the most common are:

Although chickenpox rarely results in death, it can make the skin less attractive and cause some problems, so it is vital to get checked if you experience symptoms.